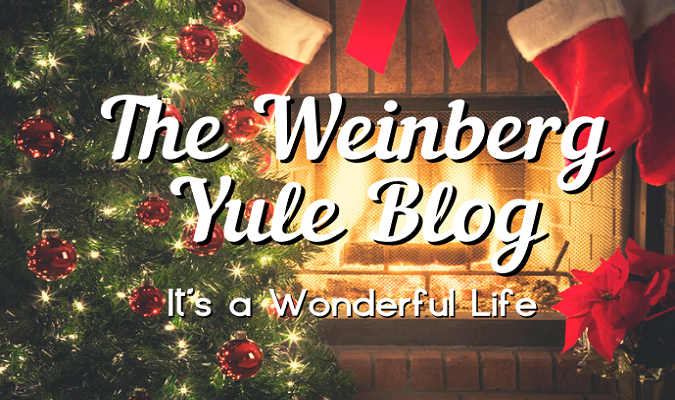 Another Holiday staple and tradition is watching “It’s a Wonderful Life”.  It seems to play on almost every TV in America multiple times throughout the Holiday season.  I don’t remember when I watched this film for the very first time, but I know I was young enough to wonder why Clarence the Angel didn’t have any wings.  Regardless, I positively LOVE this film.  This may be one of the greatest movies ever made.

Ignore the bad special effects of the heavens at the beginning of the film and the rest of the movie is just brilliantly executed.  Without question Jimmy Stewart carries this movie, but Donna Reed is picture-perfect as his lovely wife, Mary.  The cast is utterly amazing, from crazy Uncle Billy to the vile Mr. Potter (played by the great Lionel Barrymore) and even Clarence the Angel.  This film has such a wonderful supporting cast that the film was destined to be a great success, but it is clear that Jimmy Stewart’s talent outshines everyone in my favorite role of his: George Bailey.

Every time I see this film, it still amazes me.  George Bailey is such a likeable fellow that you can’t help but root for him.  It is utterly chilling to imagine a world without your own influence, a world wherein your life had been completely erased.  It may not be the most original concept, but its delivery goes from strange to downright dark and terrifying.  Thankfully, all is well in the end for George Bailey, but that glimpse into an alternate world will forever ring true with me.  We may never know how we have affected others by simply living our lives.  We may never know who we have helped along the way.  The lesson – if indeed there is a “lesson” to be learned from this magnificent movie – is clear: live your life with good in your heart.  You may never know all the positive things you are capable of doing in your life, but this movie gives you a glimpse a world without one man’s “good”.

Frank Capra was bashed by the critics once upon a time for this movie.  They called it “Capra-corn”, giving it such sentiments as “too sweet to be believable” and such.  Granted, not all critics were so harsh.  I always forget this little tidbit of trivia: Frank Capra also directed “Casablanca”.  Did you know that the idea for this movie originated from a Christmas card?  Can you believe it?!  I also recently learned the movie was filmed on a sound stage the size of an airplane hangar with REAL oak trees as props!  I always thought it was filmed outdoors.  You have to love being tricked like that!

I find it amazing that there are some folks out there that actually HATE this movie.  They point to George’s influence having a negative impact like keeping his mother dependent upon her sons instead of becoming financially independent.  I really don’t think that was the intent of Capra.  There are many older films that show us how life once was in America.  According to the film, life in Bedford Falls prior to WWII was fairly rural and it is a good representation of that age and its customs.  I find it amusing that people can look at a film like this and think it doesn’t resound with us modern folk.

I think “It’s a Wonderful Life” is priceless, a true masterpiece of cinema.  It is touching, heart-warming, and honest.  Even the smallest gesture to help someone else can go a long way.  There ARE people who give of themselves for the benefit of others.  They do what they have to for the benefit of others.  These elements still ring true today – and I bet that there is more reason to be thankful for the life you live than to think the world would be better off without you in it.

I end this review by quipping one of my favorite lines from this classic film: (from Harry Bailey) “A toast to my big brother George: The richest man in town!”

May all of us know such riches during the Holiday Season!