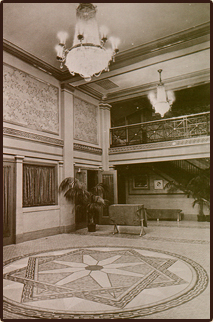 On December 23, 1926, the Tivoli, opened its doors for the first time. Built at a cost of more than $350,000, the theater was, at the time, the second largest structure ever built in Frederick. Designed to comfortably seat 1,500 people, the Tivoli not only had a sixteen-foot movie screen, but it could also accommodate live performances with an orchestra pit, a large stage, 50 sets of pulleys for scenery, and a full complement of dressing rooms.

Unlike the area theaters of the day, which catered to lovers of low-budget films, the Tivoli maintained an atmosphere of refinement. Ushers wore uniforms with gold-buttoned jackets, and the managers dressed in tuxedos. Surrounded by crystal chandeliers, marble and silk wall coverings and leather seats, an opening-night sell-out crowd watched a selection of short features and silent films.

The Frederick Daily News published an editorial proclaiming that “Frederick may indeed feel proud of her handsome new theatre . . . The erection of such a beautiful amusement house is in itself a tribute to the community. It demonstrates in a most outstanding way the faith that a great theatrical organization has in the future of our city.”

In 1940, the Tivoli became the first building in Frederick to be air conditioned – all because of a horse race.

The building was designed with large built-in fans to circulate air, but sticky Frederick summers provided a challenge. Installing air conditioning in the Tivoli would have cost more than $100,000, and the owners simply couldn’t afford it.

Enter Challedon, a race horse raised in Walkersville, Maryland, just outside of Frederick. When Challedon traveled to race in the Hollywood Gold Cup Race at Hollywood Park, he was accompanied by his owner, W.L. Brann and Brann’s friend, Edward Thomas. Thomas was not only a race fan, he was also a patron of the Tivoli.

At a pre-race party, Warner Studio head Jack Warner was overheard saying he was going to bet $50,000 on the favorite. Thomas persuaded him to bet on Challedon instead. When Challedon won the race, Warner asked how he could return the favor. Thomas’s request – install air conditioning at the Weinberg. Warner made good on his offer, and for many years afterward, the Tivoli’s air conditioning probably attracted more people to the theater than the shows did. 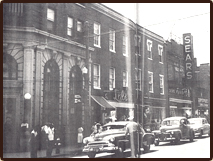 The Tivoli’s original owners kept the theater through 1930’s, but eventually sold it to a subsidiary of the Warner Brothers Corporation. By the 1950’s, television was chipping away at movie theaters’ business. And new, suburban cinemas were attracting an increasing number of patrons.

The Tivoli gradually fell into a state of disrepair. Staff painted the marble walls black to reduce glare and thick padding was used to cover the carved wood wall coverings so that they wouldn’t reflect sound. The seat coverings deteriorated and paint was peeling off the walls.

In the late 1950’s, local businessman Dan Weinberg and his wife Alyce took an interest in restoring the Tivoli to its past grandeur. In 1959, the Weinbergs bought the theatre for $150,000 and eventually renovated and reopened the theater. But by the 1970’s downtown Frederick was deteriorating, businesses were leaving and large, ornate movie houses just could not compete with suburban movie theaters.

In 1975, Dan and Alyce Weinberg and others began advocating the idea of turning the Tivoli into a cultural arts center that could be a driving force in the revitalization of downtown Frederick. In August, 1976, the theater held a 50th anniversary celebration during which initial conversations were held about the Tivoli’s future. But only two months later, the storm-driven waters of Carroll Creek flooded the theater and much of downtown Frederick. The Tivoli was nearly destroyed as water peaked three feet above stage level, submerging the seats and floating the Wurlitzer organ onto the stage. Water filled the theater, along with mud, slime and muck.

Although tearing down the building was an option, individuals and companies in the community decided to donate their services to restore much of the Tivoli’s 1920s elegance. Sixteen months and $175,000 later, on February 9, 1978, the theater reopened as the Weinberg Center for the Arts, named in honor of the Weinberg family, who donated the building to the City of Frederick.  The building was now equipped to showcase live performances and theater as well as film.

The center is still owned and operated by the City of Frederick, with the support of the Weinberg Center for the Arts Inc.—a nonprofit organization created in 1995. A capital campaign was started in 2008 to raise funds with the goal to reflect the center’s original style while offering more modern comfort and technology. Thanks to tremendous community support, the campaign goal was reached, and renovations officially began in the summer of 2011. Updates include new carpeting, refurbishing of the outdoor ticket booth, and new chandeliers. In the grand lobby a new ticket desk has been built. A lighter color scheme was used to brighten the spaces and meticulous decorative painting adorns the grand lobby, vestibule and mezzanine bar area.

Classic and silent movies are still a crowd favorite, accompanied by the beloved Wurlitzer organ. The theater offers about 150 events annually, and numerous local arts groups perform at the Weinberg to raise funds for their organizations. Today, the Weinberg Center for the Arts is regarded as the county’s home for the performing arts, and the former Tivoli is once again a source of entertainment and pride for the community. With ongoing renovations and an impressive variety of exciting arts entertainment, “The Jewel of Frederick” shines brighter than ever.

One of our most asked-about possessions is our mighty Wurlitzer organ. Purchased and installed in 1926 at a cost of $19,000, it continues to entertain audiences during silent movies and sing alongs. The Weinberg Wurlitzer is the only theater organ in Maryland still in its original installation.

Our theater was designed to handle both films and stage shows, and when it first opened its doors in 1926, most films were silent. The solution – a two-manuel Wurlitzer that generated a magnificent, booming sound from 656 pipes built into the theater walls. During the 1920’s our organ accompanied Douglas Fairbanks, Jr., John Barrymore, Gloria Swanson and dozens of other stars of the silver screen. The price of a movie ticket back then – thirty cents.

At the keyboard in 1926 was George Emmans. For the then-impressive wage of $125.00 per week, Emmans had to play flawlessly nearly every minute from 15 minutes prior to the opening matinee in the early afternoon until the end of the last reel, which was typically after 11:00 p.m.

Our Wurlitzer was known for being full voiced. So extremely full voiced that Emmans’s successor, George T. Schroeder, Jr. had to hang blankets over the pipes to end patron complaints about the volume. But the thing that finally silenced the Wurlitzer was the advent of talking films.

The Wurlitzer fell into disrepair along with the rest of the theater during the 1950’s. But in 1959, local businessman Dan Weinberg bought the theater, dedicated to restoring it to its original grandeur.

Some organ enthusiasts found the Wurlitzer under a pile of canvas drop cloths and decided to return it to playing condition. With occasional work, the organ was rendered usable. In 1969, the Potomac Valley Chapter of the American Theater Organ Society (ATOS) decided to completely restore the Wurlitzer from the ground up, including the replacement of almost everything except the ivory keys and the metal pipes. The effort was headed by Ray Brubacher, who would go on to become the theater’s long-time organist. When the full restoration was completed in 1970, organ virtuoso Lee Erwin traveled here from New York to accompany the 1928 film “Wings” at a rededication ceremony.

With the organ fully restored, many members of the ATOS traveled to Frederick to play it. The Wurlitzer was such a hit that the ATOS leadership decided to hold a national rededication of the organ during its 1972 convention in Washington, D.C. Eight hundred ATOS members made plans to visit Frederick for the ceremony.

Just days before the celebration, hurricane Agnes blasted the entire mid-Atlantic coast, pouring many inches of rain over downtown Frederick, flooding the Monocacy River and the theater basement. The organ blower motor, located in the basement, spent an entire day under ten feet of water. Electrical short circuits completely burned out the motor’s bearings and windings.

A emergency replacement motor was ordered, but the equipment delivered was unusable. Dan Weinberg, who had come to the theater’s rescue in 1959, loaded the old motor in his car and drove it to a service shop in Frederick. He told the employees, who were surrounded by piles of equipment damaged by the storm, that the Wurlitzer’s blower motor had to be rebuilt by the next morning, regardless of the expense. The repairs were completed overnight, and the following day, organist Hector Olivera performed for a full house.

In the fall of 1976, Frederick experienced another round of severe flooding from days of heavy rains. This time, flood waters rose out of the basement into the main part of the theater. The Wurlitzer floated up from the orchestra pit, on to the stage, and came to rest hanging precariously over the edge of the stage, covered with mud, slime, grass and weeds.

For more than a year, an army of volunteers worked to restore the theater and the Wurlitzer. And in February, 1978, the theater opened again, complete with its beloved Wurlitzer.

Our organ is now playing better than ever, and we’d love for you to hear it in person. Just visit us during a showing of a silent film to experience the same pleasure our audiences did more than 75 years ago when they came to the Tivoli to be entertained by the mighty Wurlitzer. Make plans now by checking out our silent movie schedule.

The Wurlitzer is played by Baltimore native Michael Britt, who previously served as a substitute for longtime organist Ray Brubacher.

Britt has been featured on a number of televised presentations on the theater pipe organ, including an appearance on Maryland Public Television. He serves as the minister of music and organist at Brown Memorial Park Avenue Presbyterian Church in Baltimore and assistant organist at Beth-El Congregation. He is on the faculty at the Community College of Baltimore County and holds a bachelor’s degree in organ performance from the Peabody Conservatory of Music.