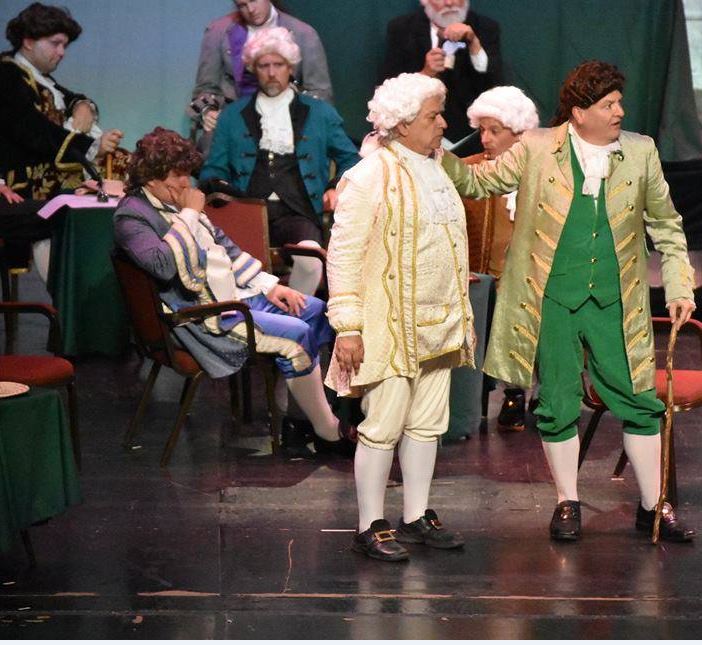 As July 4th approaches, what better way to be patriotic than to see a musical based solely on the events leading up to the signing of the Declaration of Independence?  1776 The Musical, is performed by the Landless Theatre Company, and directed by Andrew Lloyd Baughman.  I had the pleasure to interview Andrew and learn a few tricks of the trade, as well as what audiences can expect from this show.

The Landless Theatre Company is dedicated to producing exciting and accessible art to new audiences. What do you mean by “new”?

Our core mission is to draw people to theatre who are not regular theatre-goers. We feel that with Netflix and Amazon streaming available in everyone’s living room, the thought of going to theatre has become like “jury duty,” and audiences are forgetting how exciting a live performance can be. Or maybe they have never experienced an exciting live show. We approach every show we produce as a once in a lifetime event, whether it’s the world’s first heavy metal cover of Sondheim’s SWEENEY TODD, or a big classic-style production of 1776 featuring local politicians and patriots replicating the daily lives of the original politicians and patriots.

What is your goal for The Landless Theatre Company in years to come?

My wife Melissa (a co-founder and Associate Artistic Director) and I live here in Frederick, so we’d love to build our relationship with Frederick audiences, and find a place to workshop our new productions for Frederick audiences. We’ve received Helen Hayes Award nominations and international press for our MetalTheatre series, and that is becoming a central artistic focus for Landless. We really hope to take our original MetalTheatre productions of SWEENEY TODD, THE MYSTERY OF EDWIN DROOD, and CARNIVAL on tour in the future.

1776 The Musical is about what happened leading up to the singing of the Declaration of Independence, do you think there is a lot to learn from it?

We live in a time of extreme political division, so it is important to remember that the Founders themselves were as divided as could be imaged about declaring independence from Britain and abolishing slavery. In one scene, 1776 depicts a physical fight breaking out on the floor of congress. That sort of thing really happened! And yet, somehow, these men found a way to put aside their differences and work together for the good of the country. We can learn so much from that.

Are you a history buff? Why did you choose 1776 The Musical?

I am a serious Revolutionary War history buff – and Frederick City is a mecca of history! When I was about 18 or so (circa mid 1990’s), I attended a production of 1776 at DAR Constitution Hall. It featured a core of professional actors (coincidentally, the director also played John Adams) with a number of Congress members making cameos in supporting roles. It was wildly popular, and such an exciting show. I pitched the idea of doing something similar at the Weinberg last year to John Healy, he thought it sounded interesting, and here we are in our second year! Most cast members are returning again, they loved being a part of it!

What can we expect from this show?

1776 is written to be a BIG show, it was made for a stage like the Weinberg Center, and this is a rare opportunity to see it produced as it was originally intended. I play the prickly John Adams, and we have a number of accomplished regional actors and vocalists in central roles such as Jack Evans (MET) as Rutledge, Laura J. Martin (Washington County Playhouse) as Abigail Adams, Joe Waeyaert (Way Off Broadway) as Jefferson, and the incomparable Lee Merriman (Totem Pole Playhouse) as Ben Franklin. It’s also really fun to see local people you know bring these textbook historical icons to life.

Our Mayor Michael O’Connor is a surprisingly good actor! He plays the role of Lewis Morris, a New York representative who is forced to constantly abstain from voting. There’s a powerful moment at the end of the play where he makes an emotional choice. It’s a small role, but he really demonstrates how important and memorable a small role can be.

Former Delegate Rick Weldon plays John Dickinson of Pennsylvania, the primary antagonist against independence. He has a lot of acting experience, and commands the stage in a masterful performance!

It’s also fun to see a different side of these local luminaries. Our stage manager Amanda Williams describes Tom Lynch’s (Miles & Stockbridge) portrayal of the timid James Wilson as “adorable and cute as a button.” One cast member commented “I’ve never ever heard him described that way – he’s a shark in the courtroom!”

In short: expect to see history brought to life on the Weinberg stage, and prepare to celebrate the 4th of July for the first time again!

You can catch the Landless Theatre Company’s production of 1776 The Musical performances on Friday June 29th, Saturday June 30th, and Sunday July 1st. Tickets can be purchased online at weinbergcenter.org, on the phone at 301-600-2828, or in person at the Weinberg Center. Get your patriotism on just in time for the Fourth of July!