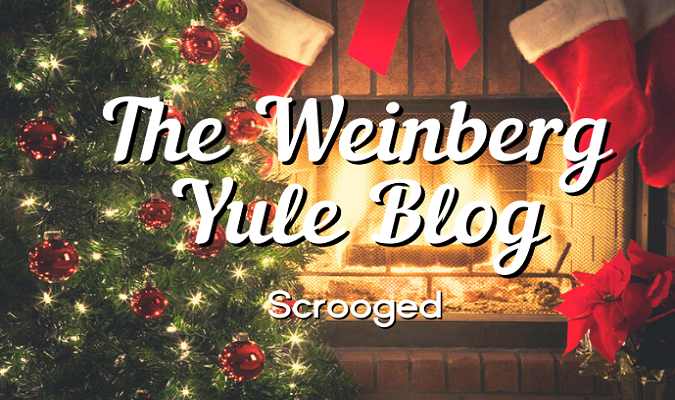 I have never been a big fan of the classic Dickens tale.  I suppose this morality tale struck me as very odd when I was younger.  I love spooky stories and the “3 Spirits” would have been better in my mind if they would have been scarier.  Maybe Ebenezer Scrooge just didn’t strike me as believable as the miser who has a change of heart?  I mean, in one night suddenly he decides to be kind and caring towards Bob Cratchit?  This is the crux of my issue with the story.  Just because Ebenezer is shown what could happen, he pledges he will change and a main thrust of this is Tiny Tim – a boy he didn’t even know existed prior to this night!  I know why Dickens used this but the construction of it never sold me on the change in Ebenezer.  Anyway, I have always had issue with a lack of personal connection between the miserly boss and his employee.

In 1988, along came a fresh new take on the classic story.  It is in some ways darker.  There was certainly more humor in it, but the spirits are not nice and that version of Jacob Marley was absolutely frightening!  John Forsythe as a zombie is bad enough, but that mouse and the golf ball?  Yikes!

This version of the Christmas Carol story changes Ebenezer into a legendary character known as Frank Cross played by the incomparable Bill Murray.  Cross is a power-hungry head of a TV broadcast company, jaded and cynical, marred by his own success and utterly out-of-touch with his own feelings.  Murray delivers Frank Cross as only he can do.  He comes off as stressed, desperate to avoid any real connection, and seemingly having a nervous breakdown.  Murray delivers a character that is being consumed by his own ambition and having lost sight of his moral compass entirely.  Frank goes through all that Ebenezer would have, but the difference is that his past love life moves the story into a whole new arena.

The great Karen Allen is Claire, the girl of Frank’s dreams that he let slip away once upon a time.  Frank wasn’t always this jaded cynic.  We are shown Frank, through these vignettes of Frank’s past, in a more innocent time and we see how he started to slip into the allure of power.  His hard work ethic and his dedication earns him a close connection to the boss but at the expense of spending a Christmas with Claire & friends.  Allen brings such joy to the story.  She is fresh and jubilant, and she is really the voice that can save Frank from himself and bring him back from this brink of moral bankruptcy.  She is such a welcome addition to the story because it suddenly seems more plausible.  A person from his past that he was deeply connected to returns into his life with the simple message “It’s never too late”.  THAT is far more realistic than “Tiny Tim” suddenly changing the heart of Frank/Ebenezer.

And the 3 Spirits?  Were they scary enough for me?  Yes!  Though not as you may think.  My favorite is David Johansen (aka. Buster Poindexter) as the Ghost of Christmas Past!  “Niagara Falls, Frankie Angel.  Niagara Falls.”  He is this sort of vile, scummy, hard-drinking and smoking elf with some really dark humor.  There’s something slightly sinister with him.  His maniacal laughter and interactions with the TV audience in studio with “It’s a bone, you lucky dog!” seems almost unhinged.  Even his criticism of Frank for watching too much television growing up and not “getting more out of life” is both vicious and spot-on.  He also makes a repeat appearance, which I know it may seem like a small change to the story, but it’s like he just won’t go away.  He is in a word “haunting”.

Carol Kane is the Ghost of Christmas Present and she is a frightening individual, looking like Glinda from the Wizard of Oz but wildly physical and brutal.  Her line about “don’t vex me, Frank or I’ll fix your mouth so it won’t hold soup” – yeah, that always struck me as particularly vicious.  And of course, who can forget about the toaster?  Written in as pure slapstick humor, there is still this underlying aspect of how inconsequential she views Frank in that moment.  She means business and if Frank won’t see it, well then she is just going to have to rough him up!

Lastly, there is the terrifying end for Frank in the incinerator.  The Ghost of Christmases Yet to Be is his usual creepy self, except this one has a TV for a face – a reflection of Frank’s own downfall if you will.  The crash-landing of the elevator is spectacular, a truly visual analogy of hitting “rock bottom”.  The visual effect of the smoke plume billowing out from the robes of this Spirit is particularly well-done.  Yet, it is Murray’s portrayal of the desperation of Frank as he tries to save himself from the incinerator that gets me every time I see this movie.  He isn’t down on his knees praying that this Spirit stay his hand at his own gravesite.  No, in this telling we get something WAY more visceral.  The elation that hits Frank when the elevator doors pop open and he gets Elliot (Bobcat Goldthwaite) instead of that dreadful Spirit is tangible!  I think the audience can feel it right away.

Lastly, there is the song by Annie Lennox and Al Greene “Put a Little Love in Your Heart”.  Yes, I think it is a cheeky addition to the tale, but still – it is catchy.  Murray’s sing-along with the audience is probably lost on anyone today.  However, I happened to see this in the movie theater when it was first released and let me tell you something, it was a lot different then.  The audience I was seated with?  Yeah, they sang along at the end and laughed out loud at Murray’s commentary.  To this day, I remember feeling that this was really kind of special – I had never seen that happen before in a movie theater (“Rocky Horror Picture Show” notwithstanding).

May this holiday season find each of us “ready for the miracle”, in whatever form that takes.  Happy holidays!