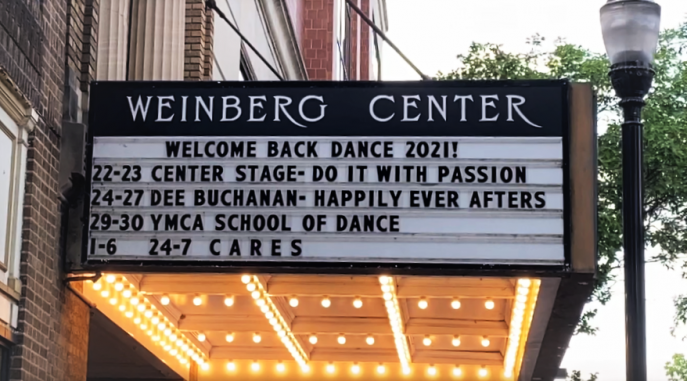 The weather in Frederick is notoriously fickle in the spring. From the mountain peaks of Thurmont to the river valleys of the city itself, the weather can swing wildly from cool and sunny, to so humid the scent of your morning coffee sticks to your skin for hours. It is a quirk locals are accustomed to, a physical reminder of the transient nature of our day to day lives. However, on an early afternoon in mid-May, the staff of the Weinberg had their own reminder of just how fast our lives can change. The doors of the near 100-year-old theater opened for the first time in 14 months for a pre-season staff meeting, and the call of the sunny weather was forgotten as the promise of a return to normal post-COVID-19 beckoned.

When the Weinberg Center for the Arts closed its doors on March 12th, 2020, the staff believed it would be a short intermission-a nice two-week vacation- as the county figured out what to do about the new virus, COVID-19. The theater had survived a world war, the death and rebirth of the downtown district, and a 3’ flood among a slew of tragic events in its lifetime; another viral epidemic would be no threat. So, documents were left on basement desks to look over in a few weeks, forgotten office treats continued to go stale in their holiday tins, and uncapped pens in decade old cups slowly gave up the ghost as they dried out. Spring dance recitals and performances were cancelled or postponed for a few weeks until COVID-19 was under control. COVID-19 however, was just getting started, and the Weinberg and theaters across the country found themselves shuttered indefinitely.

Today, as vaccinations continue to increase nationwide, and the Governor loosens public safety guidelines, the Weinberg is opening its doors again. Production of the 2021-2022 season is underway with the local dance recitals kicking off the month of June.

“Last year we were heart broken when we were unable to have an end of the year performance. We are very excited to have the opportunity to perform in our “home” theater again. We have been hosting our shows at the Weinberg Center for the past 15 years and it just seems fitting,” said the owner of 24/7 Dance Studio, Gina Korrell. 24/7 is one of the dance companies performing this month at the theater.

Grammy nominated country music artist, Jamey Johnson, will be the first out of town concert of the season on July 19th, with other big names in the works such as John Hiatt and The Jerry Douglas Band, and accapella group Straight No Chaser.

The Weinberg has reconfigured high touch surfaces and air circulation in the public’s absence to ensure that the theater is safe and ready to open. UV lights and Hepa vent filters have been installed to help sanitize the lobby and theater; the front doors, bathroom sinks, soap dispensers, and paper towel dispensers are now touch free; and hand sanitizer is available throughout the theater. Masks are still required to ensure everyone’s comfort, and the concessions stands have been closed to reduce the need to remove face coverings in the theater. Most exciting of all is the new playbill technology the theater is beta testing this month. Starting in May, playbills are available in traditional paper format, but patrons are highly recommended to try the new digital playbill. The playbill is accessed via a smart phone camera scan of the QR code projected onto the stage before the performance.

The Weinberg is open and ready to welcome its patrons back to their second home this spring. The full 2021-2022 season will be announced on August 5th, 2021.