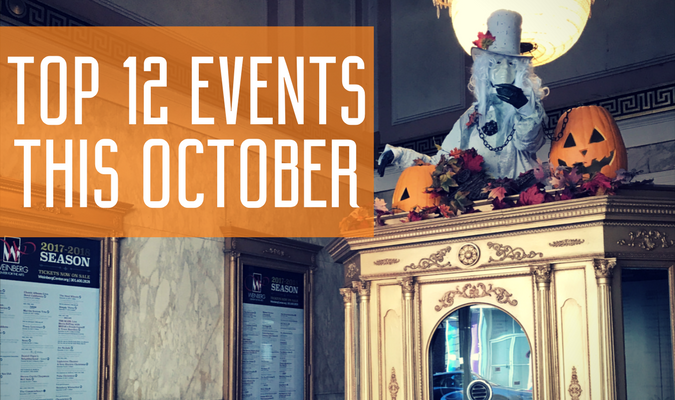 It’s that special time of the year again! It’s pumpkin spice season…wait, we meant to say it’s finally the fall season here at the Weinberg! There’s something for everyone on our stage this month. To help you out, here’s the top 12 events you won’t want to miss:

From New York City, the three Bailen siblings and their closest childhood friend bring their family jam sessions to the Weinberg stage. Don’t miss this pop-infused folk show with singers praised to “rival Simon and Garfunkel” by Entertainment Weekly. October 5 at 7:30pm

Relive the girl-group era glory days with Darlene Love as she rocks her way through dozens of chart-topping classics, as well as her latest hits. Don’t miss the legendary singer named “one of the greatest singers of all time” by Rolling Stone. October 6 at 8:00pm

Have you ever thought “I could do that” while watching The Price Is Right™ at home? Well here’s your chance! Share the stage with Jerry Springer as he hosts The Price Is Right Live™ and go the distance to win that vacation, appliance, or maybe even a new car. So come on down to the Weinberg and bring the whole family! October 8 at 7:00pm

12 years in and still running strong, the 72 Film Fest is back at the Weinberg this October. Regional filmmakers had only 72 hours to make a movie, and now you get to vote for your favorites! With films premiering Friday night followed by Saturday’s main event, film buffs will want to clear their weekend schedules for this one! October 13 at 6:30pm and 14 at 7:00pm

Who doesn’t love magic? In mid-October, five world-class illusionists will bring their daring illusions, spectacular tricks, and even mysterious mind-reading to the Weinberg stage. Don’t miss out on the Champions of Magic’s “pulse-racing” show the Hereford Times called “slick, clever, funny, and amazing.” October 17 at 7:30pm

6 | Catch the spirit of fun with Flip FabriQue

The family fun doesn’t stop with magicians: Flip FabriQue continues the joy with their acrobatic tour de force, Catch Me! Hailed for their “irrepressible spirit of fun” by The New York Times, Flip FabriQue is a circus full of stunning, gravity-defying performances…and even popsicle-eating contests. October 18 at 7:00pm

One of the best-selling American albums of all time is coming to the Weinberg with Classic Albums Live’s tribute to The Eagles’ iconic record, “Hotel California.” Come hear the whole album performed live, including hits like “Wasted Time” and “New Kid In Town,” followed by other Eagles favorites. October 20 at 8:00pm

8 | Sit down and relax with road poet Martin Sexton

Heralded as “a soul shouter, a road poet, a folkie, and a rocker” by the LA Times, Martin Sexton is bringing his singer-songwriter trio to Frederick to celebrate his latest release “Mixtape of the Open Road.” You won’t want to miss this diverse cross-country show! October 21 at 8:00pm

9 | One of country’s most recognizable voices come to Frederick

Tracy Lawrence is one of the leading voices in country music today, and is on track to recording his career-defining album, according to Billboard. With eighteen #1 singles and nearly thirteen million album sales under his belt, you won’t want to miss the icon known for hits like “Paint Me a Birmingham” and “Alibis.” October 22 at 7:00pm

With Tom Cruise, Jack Nicholson, Demi Moore, and more, “A Few Good Men” follows a military lawyer as he defends marines being accused of murder. Come enjoy the 1992 cult classic… and don’t forget about the happy hour before the show at 6:30! October 25 at 7:30pm

11 | Explore the intersection of African-tinged grooves and supple jazz

International songwriter Somi is bringing her distinct blend of social consciousness, jazz, and soul music to the Weinberg later this month. Named “the quintessential artist citizen of the world” by NPR, this musical powerhouse pays homage to her roots in an evening of melodic storytelling. October 26 at 7:30pm

Hailed as “the Michael Jordan of Christian music” by TNT, Steven Curtis Chapman is the most-awarded Christian music artist in history. With thirty years of music and five Grammy awards to his name, you won’t want to miss him… live! October 29 at 7:00pm