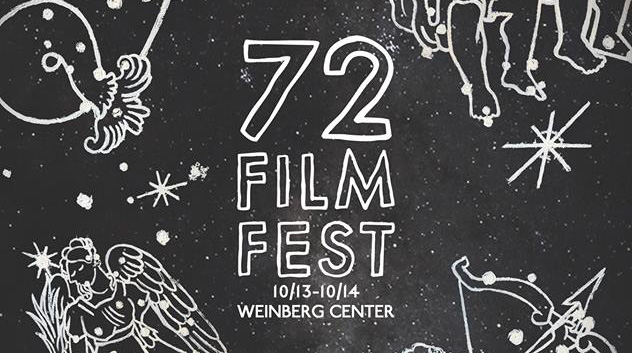 The days are closing in on our local filmmakers as everyone gears up for the 72 Film Fest, which kicks off tonight! With only 72 hours to create their films, the artists will compete with each other this Friday and Saturday. To gear up for the festival, we got to meet with the fest’s very own Clark Kline.

What pushed you to start the 72 Film Fest?

“Filmmakers, especially on the ground and local level, didn’t have a lot of places to screen their work. And a lot of artists, like me, need deadlines and inspiration to write (or make movies), so throw all that in the blender and we get 72. We enter one weekend with no movies, and on the other end we have 40-50 new shorts all screening at the historic Weinberg Center in front of hundreds of peers and film fans.”

Is there anything about the festival that usually ends up being the highlight for you each year?

“It’s like a reunion every year for the group of us that pull it off (including the hosts Doug and Mikael). It’s great having a team of friends and family working on it year after year. But the highlight is probably seeing how the teams interpret the criteria and develop or change up their style over the years. Watching all the movies, and seeing all the fun being had in the behind the scenes pics in the app…It’s cool being the impetus for so much creativity.”

What’s the most challenging part of putting together this festival every year?

“We’re a small team and we’re all volunteers with day jobs. This thing is a bit a beast to pull off partly because we add elements to it each year but haven’t really expanded our team (yet). While it takes loads of work to get us to the Launch Party when all the teams get their criteria, the hardest part for sure is the few days between when a team turns in their film on Sunday and we screen them all at Weinberg on Friday.  Basically what would normally be done over weeks (or months) in a typical film event is compressed into just days. A handful of us tests 50+ movies which usually means watching them three times minimum, running two nights of judging, building out the program with the order of the films, the team bumps and award ceremony, promotions, work with teams over any issues, and edit any last minute stuff we’re doing with the hosts.  This is just the stuff that can’t be done until we have the movies in our hands Sunday night…sometimes there’s straggling work to finish up from the preplanning as well. I’m getting stressed thinking about it but the teams are stressed all weekend while making the movies. That’s part of what makes it 72.”

How did you all decide on using constellations for this year’s theme?

“Last year we decided on tarot, and the idea for constellations came to us pretty much right after as it seemed like a logical next step. We have years 13 and 14 already figured out as well.”

Has anything made this year’s festival different from previous years?

“We always try to add something new each year, and this time we have a bit of a physical element to the criteria. Some years it’s a lot easier for the team to jump off and make a movie. One year was Hollywood mashups where each team chose two random VHS copies of movies and they were asked to combine them into a new movie.  So as long as the team had seen, say, Home Alone and Terminator, they could easily jump in and make a movie around that.  For this year, as well as for our fairytale year, it requires a little research on the team’s part.  So Shae Yamrus designed and gave out a handmade envelope containing some excerpts from various books about the constellation that each team was assigned to help them get started.”

And finally, how did you first get started making movies?

“There’s a few filmmakers on the team, but I was more a writer plugging away on unfinished novels, then got involved in making movies back in mid 2000’s.  I made a few shorts, helped write/direct a couple super-indie feature films that premiered at Weinberg Center. Then I moved into starting 72 Film Fest and haven’t really looked back outside of directing the comedy sketches with the hosts. This past year I’ve helped produce the feature film ‘Leda’ directed by Samuel Tressler IV, which will be going out to festivals early next year.”

If you’re looking to come out and vote for your favorite local films, head on over to our 72 Film Fest page for more info! See you at the theater!