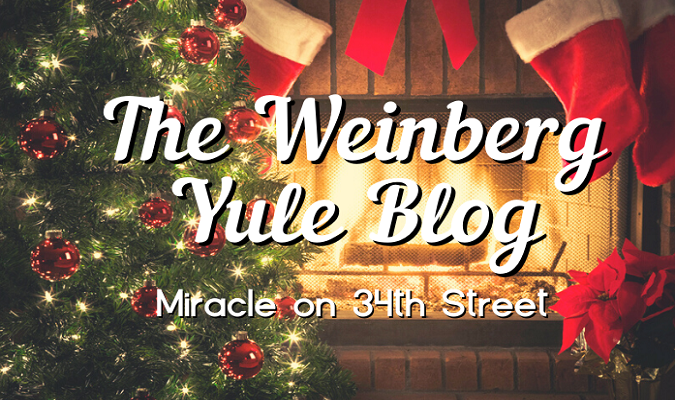 How do you prove Santa Claus is real?  What if you met a man that claimed to be him?  What if you were a child and you met that man?  And what if that child was aware of the multitude of “Mall Santas” that existed?  What would it take to convince you he was real?  This is the plot behind the holiday classic film of “Miracle on 34th Street”.

As challenging a concept as this story is, you can clearly see that it would not work unless you had the casting right for both Kris Kringle and the child leading role.  Fortunately for the entire world, they cast Edmund Gwenn and Natalie Wood in those roles.  How good was that pick?  Well, Edmund Gwenn won an Oscar for his portrayal of Santa in the film, and the film launched the career of young Natalie Wood.  Supporting them was the great Maureen O’Hara and the often-overlooked John Payne.

How good was this film?  For starters, it has been reproduced as a radio show, twice as a Broadway play, 3 times as a television show, and has been remade as a movie only once (and slammed by critics that absolutely HATED it).  It also won 3 Academy Awards in 1947.  And it has been preserved in the National Film Registry by the Library of Congress as “culturally, historically, or aesthetically significant“.  Not too shabby, right?  Apparently, the script was so good that the reluctant O’Hara (who had just moved back to Ireland) liked it so much she jumped on a plane and came racing back to New York to begin filming.

The film was really shot at the Macy’s Thanksgiving Day Parade in New York in 1946, a rather chilly day from all accounts.  R.H. Macy as the character in the film that owns Macy’s Department Store was actually deceased by this point in real history – by 70 years.  Those Christmas window displays in the film were really used at Macy’s.  The house at the end of the film is actually still standing today and appears nearly the same as it does in the movie.  That there is some reality to this fantastical drama is one of the magical elements of this film that I think have helped make it a success.

Christmas magic doesn’t happen often in a film, and financial success (let alone critical praise) often eludes holiday films.  Yet, every once in a while, a film comes along that transcends the usual parameters of such films.  “Miracle on 34th Street” was just such a movie, and audiences have adored it ever since.  The NY Times seemed to catch its spirit and called it “the freshest little picture in a long time”.  Some of the toughest critics in the world called it things like “irreplaceable” and “innocent” and “up-beat”.  Truly, this film became a Holiday classic the very moment it was released and it has never lost any of its appeal.

Maybe it was O’Hara’s portrayal of a divorced working woman raising a child on her own that captured people’s attention and helped the film achieve great success?  Maybe Gwenn was just destined for this role, as he played the part so well to so many people that many refer to this as THE definitive portrayal of Santa Claus.  Who can say for sure?  What I can say is that this film succeeds in making us all believe in a little bit of Christmas magic once more.

I do think the film’s success has a lot to do with that juxtaposition of fantasy and harsh reality.  I mean, we have politics influencing a court case.  How believable is that?  That Kris is accused of being a Schizophrenic and is given a psychological evaluation shines a light on how we treat those suffering from mental illness.  The commercial aspects of business and how greed can ruin all the joy of giving a gift are explored.  There really is a lot in this movie to unpack.  The court case and how it evolves seems not only plausible but also very real in both how it plays out and the actual outcome.  That isn’t just clever writing: that’s cinematic gold.  (That’s the truth too: the film won its other 2 Oscars in 1947 for writing.)

The film takes us all on this journey, treating all its myriad of subjects with a realistic and adult perspective.  It never gives in to the child’s perspective, although it does present such.  I think this makes the film so much richer than if done the other way.  In the end, Kris is determined not to get Susan to believe – that only took him speaking Dutch – but rather her mother, Doris.  Doris has abandoned that aspect of fairy tales and make-believe.  In short, Doris has given up on imagination and dreams.  In the end, that’s who Kris is really trying to win over.  It is so much more rewarding to convince the adult than the child.  Amazingly, for the movie to succeed it isn’t about the court case victory.  All it takes, is a cane leaning against a wall.

That end scene is so much more powerful because Kris isn’t even in the shot.  Why would he be?  Then, you begin to wonder, why would Santa Claus agree to come here and do all this?  Surely, he is a busy man at this time of year.  Why come to New York at all?  He wasn’t THAT interested in the parade, was he?  Santa doesn’t need money after all, so why would he go to work at Macy’s?  Susan isn’t the reason; it is Doris all along.  He wanted to make her accept that some imaginary things you can believe in without harming anyone – and maybe along the way, even believe in Santa Claus.

I cannot think of a better treatment of the famous editorial in the (New York) Sun from 1897 that answered 8-year old Virginia O’Hanlon’s question.  Francis Pharcellus Church wrote “Yes Virginia, there is a Santa Claus.  He exists as certainly as love and generosity and devotion exist, and you know they abound and give to your life its highest beauty and joy.  Alas!  how dreary would the world be if there were no Santa Claus.  It would be as dreary if they were no Virginias.  There were be no childlike faith then, no poetry, no romance to make tolerable this existence.  We should have no enjoyment, except in sense and sight.  The eternal light with which childhood fills the world would be extinguished.”

For Susan Walker and her mother, Doris, the film answers that question.  To each viewer, the answer to my original question is going to be different.  What would convince YOU that Kris Kringle is real?  What I find to be the bigger question is: does it matter?  As Fred Gailey states in the film, “Look Doris, someday you’re going to find that your way of facing this realistic world just doesn’t work. And when you do, don’t overlook those lovely intangibles. You’ll discover those are the only things that are worthwhile.”

Sit back and enjoy this classic Holiday film, and see if you can answer the question for yourself.