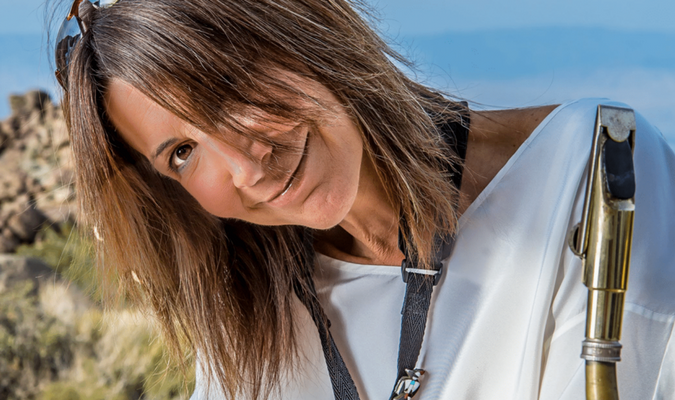 Why wait until New Year’s Eve to start the party when you can dance the night away with a Weinberg favorite? Deanna Bogart is back on stage December 30! Winner of more than 20 Washington Area Music Awards, this pianist and saxophone star is ready to jam with a unique fusion of 1930s-style boogie piano blues and contemporary sound. We got the chance to talk with Deanna about her music, her shows, and what audiences can expect to see next weekend.

1. How did you first start playing music?

There was a baby grand piano in the house from the day I was born and I started exploring on it at age two.

2. You have a strong following in the D.C. area. How long did it take to build up your fan base?

If that’s true, then I feel very lucky. I don’t think about those things. My intention has always been to keep growing as a musician and a person and and see what that means for both.

3. You’ve played with famous artists such as BB King, Paul Reed Smith, James Brown, and many more over the years. Is there any moment specifically that felt like a highlight for you?

That’s a book in itself. So many magic moments over the years and I’m excited for the ones yet to come. Although Jimmy Buffet taking off his shirt to mop up a spill on my piano from one of his rabid fans does come to mind.

I’m writing as we speak….so yes, I’m looking forward to having a new recording within the year. I’ve been traveling more then ever these last few years and going to all kinds of wonderful places I’d never been before, so all of life is inspiring me at this time. It’s a nice space to be in.

5. What albums or musicians have influenced you the most over the years?

6. Blues has been around a long time and has had a profound impact on different genres. What do you think is the next big trend in the world blues?

I don’t know…but art always finds a way and the blues will always be a part of it.

7. You’ve played at the Weinberg Center as a New Year’s celebration several times. What can audiences expect of your upcoming performance?

I love this gig… and part of it is that we can all expect the unexpected, but we will have a monstrous horn section with us this go-round, maybe not in size but in musicianship.

Born in Detroit, Deanna Bogart spent her early years in Phoenix and New York City, climbing on any available piano bench to plunk and play with preternatural panache. As a bandleader/singer/songwriter/producer/pianist/sax player, Bogart combines the best of boogie-woogie, contemporary blues, country, and jazz into a splendid blend she calls “blusion.” This unique sound has garnered her three consecutive Blues Music Awards as Horn Instrumentalist of the Year for 2008, 2009, and 2010, and an endorsement contract with Rico Reeds. She has won, at last count, more than 20 “Wammies,” the music awards for the hotly contested Washington, D.C., region. She is also a featured player in the Legendary Rhythm and Blues Revue, jamming with Tommy Castro and Magic Dick (founding member of the J. Geils Band), as well as prominent guitar slingers.

Bogart has also lent her talents to play for U.S. troops in Iraq, Kuwait, and Egypt as part of the “Blues on the Nile” tour, including performances at Cairo University, the Cairo Opera House, and even a historic concert at the Great Pyramids. Her latest ventures include Blind Pig Record’s “Pianoland,” a newly minted DVD called “Everybody Has a Story,” and “11th Hour,” a CD released on Vista Records, a company she co-founded.