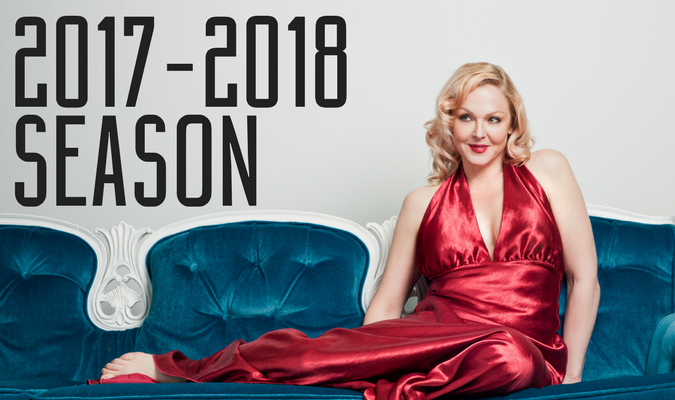 Hooray! Our complete 2017-2018 season has been announced. This year we are proud to bring you thoughtful speakers, uproarious comedians, and captivating live music — plus family favorites, powerful plays, and classic films galore.

“Putting together a season is always an adventure, as our goal is to present a diverse list of events,” says John Healey, our Executive Theater Manager. “The upcoming season presents some old favorites, but quite a few newcomers that help us fulfill our mission.”

Our 39th season of live entertainment kicks off on September 29 with powerhouse singer Storm Large, best known for her work with the band Pink Martini. From there, our Live! Series will feature “America’s Got Talent” comedian Tape Face, rock n’ roll icon Darlene Love, Grammy-winning ensemble Chanticleer, veteran movie-riffers Frank Conniff and Trace Beaulieu, and a ton more. They will be joined by dozens of other talented performers, from celebrated favorites like Mandolin Orange to fresh faces like Alicia Olatuja.

We will once again host the Frederick Speaker Series, which is celebrating six seasons of bringing world-class leaders into the community. As previously announced, the lineup features Dr. Temple Grandin, Ted Koppel, Mitch Albom, and Rita Moreno. Word on the street is that tickets for these inspiring events will be the first to go… you’d better move quickly!

Our 2017-2018 Family Series will feature familiar and new characters alike in performances appropriate for all ages. Acrobats swing from the rafters, magicians make the impossible possible, and beloved TV characters jump to life on stage. Make it a family outing when you see Champions of Magic, Flip FabriQue: Catch Me!, Daniel Tiger’s Neighborhood – LIVE!, Lightwire Theater: A Very Electric Christmas, and Catapult.

As part of our commitment to keeping the arts affordable, we’ll continue to showcase emerging artists in our pay-what-you-want Tivoli Discovery Series. The 2017-2018 lineup includes Bailen, The Commonheart, Cyrille Aimée, New Breed Brass Band, and Dead Horses. Take a chance and you just may discover your new favorite artist!

Honoring our roots as the former Tivoli movie palace, we’ll continue to present our beloved Silent Film Series, featuring live accompaniment on the mighty Wurlitzer organ. The series begins November 4 with a screening of 1925’s stop motion spectacle “The Lost World.” The popular Flying Dog Film Series returns September 27 with “Tombstone” and will feature films such as “The Princess Bride” and “Dirty Dancing.”

So, make your list and mark your calendars! Just a few days until those coveted tickets can be yours. See you at the theater!