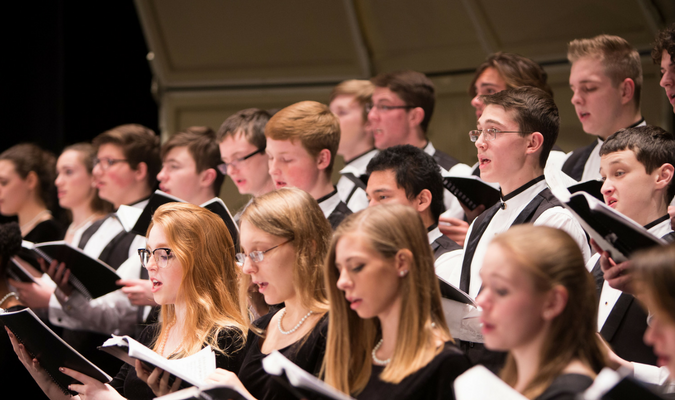 Join us for an annual tradition, 23 years in the making! The Frederick Chamber Singers is the senior level ensemble of the Frederick Children’s Chorus. In the tradition of the sing-along, the Chamber Singers will lead the enthusiastic audience of adults and youth through the well-known choruses of Messiah by G. F. Handel. From the tender “For unto us a Child is Born” to the celebratory “Hallelujah,” Messiah brings to life the drama of the story of the coming of Christ, His suffering, and concludes with exquisite “Amen.” Singers return year after year to the Weinberg Center to revel in the beauty and intricacy of this masterwork. Families make it an annual holiday tradition, and general admission seating allows friends to meet up and sit together.

Artistic Director Judith DuBose will lead the thirty-voice chorus, accompanied by a twenty-piece orchestra, and enhanced by four professional vocal soloists. Each soloist brings to life the words of the Old and New Testament, telling the story of the event celebrated around the globe. Hundreds of singers fill the auditorium, waiting for their turn to sing, and listeners will have the opportunity to sit among them. Singers may bring your score, or purchase one in the lobby, and listeners may follow the lyrics in the program.

The Frederick Children’s Chorus has a thirty-two-year history of presenting breath-taking concerts in and around historic Frederick County. In 2013 the chorus Touring Ensemble was invited to perform at Carnegie Hall in Choral Festival directed by the esteemed director, Anton Armstrong. The Chamber Singers consists of high school aged vocalists who annually present this community event. These finely trained singers have been praised for their sensitive artistry and exquisite intonation.  Recently, members of the chorus performed Hymn to St Cecilia by Britten, Rejoice Earth and Heaven by Buxtehude, and Mass of the Children by Rutter.

Judith DuBose is a choral director, clinician and advocate for music activities in school and community settings.  While a music teacher in Montgomery County she taught general music and vocal music in elementary and middle schools.  Prior to teaching in Montgomery County, she taught middle school and high school in Frederick County, MD. She holds a B.S. in Music Education from West Chester State University (PA) and a M.S. in Music Education-Kodály Methods from Loyola University of Baltimore (MD).  She has completed three levels of certification from Choral Music Education Institute, Doreen Rao, Artistic Director.

Mrs. DuBose is the Artistic Director and Founder of the Frederick Children’s Chorus, which she established in 1985.  The Frederick Children’s Chorus, under her direction, has performed throughout the U. S. and has established a reputation for excellence in artistry and musicianship.  In 1995 the chorus expanded to include the Frederick Chamber Singers, a chorus for select high school aged singers.  This ensemble annually presents The Messiah Sing-along at the Weinberg Center for the Arts, Frederick, MD.

Mrs. DuBose is an active member of The American Choral Director’s Association (ACDA), Chorus America, and MUSIK (OAKE). She is a popular elementary and middle school clinician, guest conductor, and adjudicator.