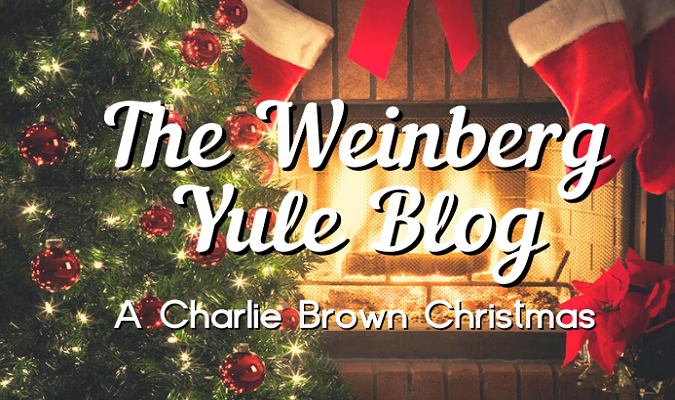 Most everyone has a Holiday tradition, something that really signifies that the Season is upon us once more.  Maybe it’s Frosty Friday in downtown Frederick?  Maybe it’s a visit to that favorite town you like to see decorated for the Holidays?  For me, it has to do with a real blockhead, some great music, and a 12-foot tall Christmas tree.

The holidays for me have started as such for more than a decade now.  In the outer lobby of the Weinberg Center in the wee hours of the morning, I haul the Christmas boxes to my “staging area”. Before I can put up a single evergreen branch though, I fire up the trusty iPhone, loaded with what has become MY classic tradition.  I turn on the soundtrack of “A Charlie Brown Christmas” by the great Vince Guaraldi Trio.  That is where I begin my journey into Christmas magic.

I grew up watching the classic kids TV Christmas Specials that always came on: Frosty, Rudolph, Santa Claus is Coming to Town, and of course “A Charlie Brown Christmas”.  As I grew up, I would still watch the special whenever it aired.  As the Christmases went by though, I didn’t really feel a connection to it any longer.  I grew up and Charlie Brown and I drifted apart. I didn’t laugh at his antics anymore, and Snoopy was soon forgotten about.

Fresh out of college, I landed a job in the fashion merchandising industry and for about 5 years, I learned to HATE Christmas.  It wasn’t the volume of the decorations (and I can still count them off today) that made my Christmas heart resemble the Grinch.   It was the music.  It played over and over and over again.  If you ever worked retail in the mall during the Season, you know what I am talking about.  Yet “A Charlie Brown Christmas” never seemed to be in that mix, and I guess I started to miss it.

Then one Christmas, the magic came back!  I made a rendezvous with “A Charlie Brown Christmas” a few years after my stint in Christmas Purgatory, and I made some great new memories watching this classic Christmas TV Special once more with my family.  I laughed out loud at everything my now-grown-up brain had missed.  Lucy and her psychiatrist set-up had me rolling!  I watched it with new eyes and I saw so much that I had missed before.  I saw the courage and the whimsy when Charlie Brown goes against the grain in picking that sad, sad little tree.  The dripping adult sarcasm that flows from the writing in that cartoon had me appreciating this Holiday Special like never before. The facial expressions alone of several characters were a sheer delight!  Snoopy managed to capture my attention once more, but I saw him as a perennial wisecracker now and I loved him all the more for it!

Fast forward a bit.  So many Christmases have passed since the dark days of working in the mall that I volunteer to take on the decorating duties for the Weinberg Center.  It was the end of a business day in late November when I first created my own Holiday tradition to begin the season.  The outer lobby gets dark fast at that time of year, and I find myself about to ascend a ladder to start trimming the tree.  Suddenly, I thought I might put myself in the Christmas Spirit with a little music.  What should I listen to?

My mind went immediately to the Peanuts gang standing around that Christmas tree singing “Hark the Herald Angels Sing”.  As night fell around me, I was lost in my own thoughts as I decked the halls – literally.  I travelled back to many Christmases past as I was fluffing the branches, winding the garland around and around the tree, and yes, even stringing up the lights.  When I was done and stepped back to admire my creation, I heard Linus Van Pelt in my head saying, “That’s what Christmas is all about, Charlie Brown.”

Linus was telling me something personal at that moment, not as it may have been intended but effective all the same.  I had rediscovered my joy of decorating for Christmas in that moment.  I had chosen that specific music to help me on that journey.  I realized that I am linked to many Christmases past through the music of that Vince Guaraldi soundtrack and the pure joy of that “A Charlie Brown Christmas” cartoon.

As I said, everyone seems to have one of those Holiday traditions to kick off the season.  Mine happens to be decorating for Christmas, and not even my own house.  The music begins, and as the very first notes of “O Tannenbaum” start to play, I roll up my sleeves ready to receive my Christmas scars once more.  There I am in the darkened Weinberg Center outer lobby, with ladder over one shoulder and a twinkle in my eye, as a slow grin starts to take over my face.